Here is the 1865 Norwegian Census for my 2nd great grandparents, Sigri Gunnersdatter and Ole Larson, residing with their 5 children (at the time of the census) on the Jordal (Jordahl) farm. 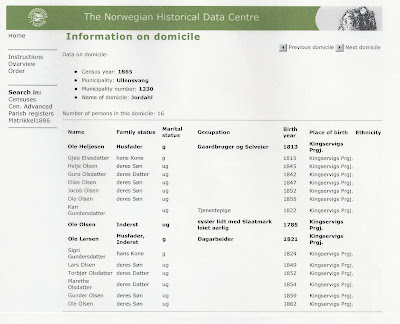 This document has the spelling of Sigri's last name as Gundersdatter, rather than Gunnersdatter which may have been another spelling of the last name.

Kari Gundersdatter was living in the household of Ole Heljesen as a "Tjenestepige" which translates to "service girl".   Dave Jordal, the great grandson of Sigri and Ole hypothesizes that Kari may have been the older sister of Sigri.

Ole Larson is listed as a "Dagarbeider" which translates to "hired".   Dave believes Ole Larson may have been hired to cut the grass and had a tailoring business on the side.

Another version of the census can be found here, which indicates Ole Larson and family were a separate household from the Ole Heljesen family on the Jordal farm.   I assume that means they lived in a separate home on the same land.
Posted by finnestad at 8:13 AM