The family of Sigri (Gunnerdatter) and Lars Oleson (or Olson) came from the Jordahl farm (number 165), in the parish of Kingsverig for the Church of Norway, in the municipality of Odde (or Odda), in the district of Hardanger, located in the county of Hordaland within the country of Norway.

The Jordal farm is located about 3 hours east of Bergen on the western shore of lake Sandvevatnet.

The spelling for the parish of Kingsverig was eventually changed to Kinsavarik.  It was originally formed in 1838.   Kinsavarik and Odda became their own municipalities when they split from Ullensvang on 1, July, 1913.  In 1964 most of Kinsavarik was merged with Ullensvang.

Hardanger is one of 4 districts in the county of Hordaland.     Today, the district of Hardanger encompasses the municipalities of Eidfjord, Granvin, Kvam, Jondal, Odda, Ullensvang and Ulvik.

Hordaland is just one of nineteen counties in the country of Norway.

In 1814, Sweden took control of Norway from Denmark.   By 1905, Norway had became an independent nation.

Here is a map showing the location of the Jordal farm. 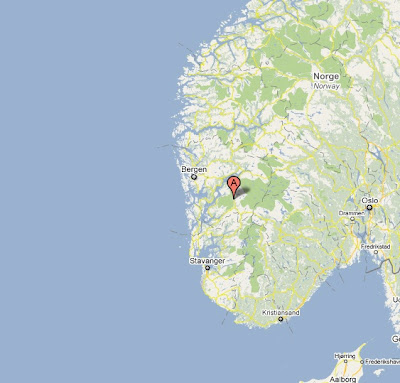 And the satellite image of the location of the Jordal farm. 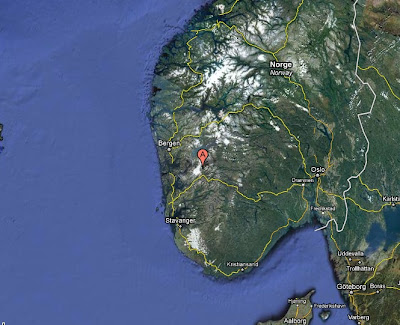 Here is a close up of the Jordal farm on a map. 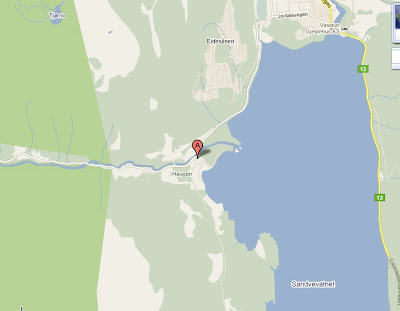 Here is a close up satellite image of the Jordal farm. 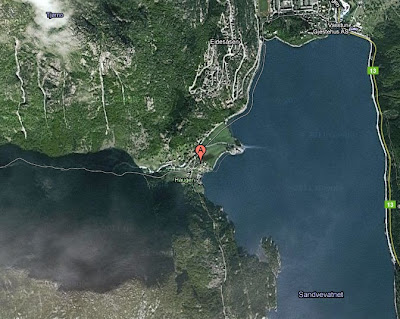 Posted by finnestad at 8:28 AM No comments:

Norwegian naming patterns are quite helpful in tracking down one's ancestors.

The given name (or 'first' name) is sometimes, but not always, determined by the following pattern:

To arrive at the last name,  for the male children,  'son' was added to the father's first name.   For the female children, 'datter' was added.    For example, in the Jordal family, Ole Larson had a son Lars, who then became Lars Oleson.  Ole's daughter, Torbjor became Torbjor Olsdatter (or Olsdatr).

For those families that lived on farms, the farm had a name which was used by the family as a second last name.   If the family moved, their last name would change to match that of their new residence.

A family tree can be found online that has been created by another descendant of the Jordal family, Jennifer Gallenbach.     Her comprehensive tree can be found via a Google search by clicking here as well as a tree* I have created in the right hand column under "tree".

*I will make additions to Jennifer's tree as I come across documentation.
Posted by finnestad at 1:28 PM No comments: