Here is the 1900 US Census for two of Sigri Gunnersdatter and Ole Larson's sons, Lars Jordal and his younger brother, Gunder Jordal. 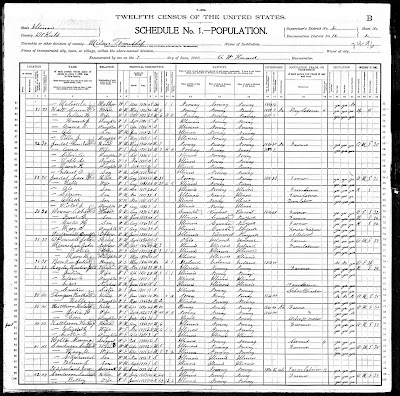 Gunder, wife Anna (Jossendal) and the first of their 4 children,  Sylvia, Mabel, Marie and Gilbert were living in Milan township, DeKalb county, Illinois.

Lars, his wife Isabelle (Halverson) and 4 of their children, Ole, Simon, Alfred and Mrytle were living next door.   Their daughter Susanna (Annie) had already married and was living with her husband (their census record will be posted at a later date).   Lars and Isabelle's other child, Lars Jr had passed away twelve years earlier in 1888.

Both Gunder and Lars were farming the land they had purchased a few years earlier.
Posted by finnestad at 8:30 PM